A Look into the History of Pride and (Tax) Prejudice 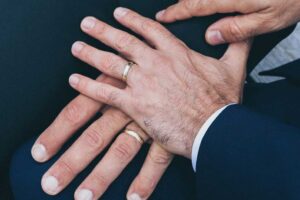 While taxes might not be the first topic that comes to mind when someone mentions Pride Month, taxes were exactly the issue at hand when the Supreme Court held that federal level discrimination against same-sex spouses violated the Due Process and Equal Protection Clauses of the United States Constitution. That landmark case was United States v. Windsor, 570 U.S. 744 (2013), and it acted as a catalyst for enormous and rapid social change in the United States for LGBTQIA+ people and communities.

When Thea Spyer passed away in 2009 and left everything to her wife, Edith Windsor, Windsor was faced with a federal estate tax bill of over $360,000. At the time Spyer passed away, the federal government did not recognize same-sex partners as “spouses.” Despite the fact that Spyer and Windsor married in Ontario, Canada, where the marriage was legal, and lived in New York, where it was recognized, Windsor did not enjoy the limitless “marital deduction” that was afforded to heterosexual married couples.

The marital deduction allows spouses to pass gifts and estates of any size to each other without facing federal tax consequences or lowering their “federal exemption.” Generally, when people pass gifts to non-spouses, they can only pass a certain amount before triggering federal tax consequences – the federal exemption amount. In 2009, a person could leave $3.5 million to their non-spouse beneficiaries tax-free. Anything over and above this amount was hit with a flat 45% tax.

When a person leaves gifts to spouses, however, these gifts are neither taxed nor do they count against that federal exemption. To illustrate, a person in 2009 could leave $6 million to a spouse and $3.5 million to a stranger, and none of it would have been subject to federal estate tax (assuming no lifetime gifts over the applicable lifetime gift threshold were made).

Of course, in Windsor, the Due Process and Equal Protection Clauses took the day, the relevant section of the Defense of Marriage Act defining “marriage” only as among heterosexual couples was repealed, and Windsor got her tax refund.

After Windsor, the IRS issued Revenue Ruling 2013-17 which explained that, going forward, only those surviving spouses who were married in a jurisdiction with laws authorizing same-sex marriage could take advantage of the marital deduction. If a couple had claims that were within the relevant statute of limitations, they could amend or supplement their returns and get their refunds or restored exemptions (or “exclusions”).

Two years later, the Obergefell decision came down, where the U.S. Supreme Court found that state laws denying same-sex couples the fundamental right to marriage were deemed in violation of the Due Process and Equal Protection Clauses. Obergefell v. Hodges, 576 U.S. 644 (2015).

In 2016, the IRS offered proposed amendments to the Code of Federal Regulations to codify the rules set forth under Rev. Rul. 2013-17. While the rules seemed restrictive as they were set out in 2013, the Obergefell decision expanded their reach and gave every married same-sex couple in the United States the same tax benefits as their heterosexual counterparts.

Finally, in 2017, the IRS issued Notice 2017-15, laying out the administrative procedures for taking advantage of the “Restored Exclusion Amount” on Forms 709 (Gift Tax Return) and 706 (Estate and Generation-Skipping Transfer Tax Return). By making it possible for same-sex couples to restore the exemptions they were forced to use when making gifts or leaving estates to their spouses, the IRS narrowed a huge disparity in the tax treatment of same-sex versus heterosexual married couples. As the tax bill in Windsor made clear, federal estate taxes are significant when they are imposed.

Rules surrounding gift and estate tax, especially in the case of families considered “non-traditional,” are complex, but the Estates & Trusts team at The Lynch Law Group is here to help with this essential aspect of proper estate planning. Please call 724-776-8000 to arrange a time to speak with one of our attorneys. You may also submit your information through our Contact Form and someone from our office will reach out to you.