Spinning Out of Control: Peloton’s Attempts to Cancel a Trademark Bully

Home » News » Spinning Out of Control: Peloton’s Attempts to Cancel a Trademark Bully 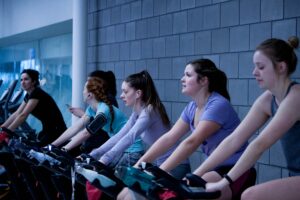 Have you attended a spin class at your local gym or health club? Or are you immersed in the more timely, sanitary home-spinning craze? Have you related either of these activities to a company called Mad Dogg Athletics, Inc.?

Likely not. However, Mad Dogg owns several US trademark registrations, including Registration No. 2173202 for the term “spin,” and has, over the years, aggressively gone after businesses using the terms “spin” or “spinning” to describe these various forms of stationary cycling. Regarding its most recent target, however, Mad Dogg may have bitten off more than it can chew.

In December 2020, Mad Dogg demanded that Peloton remove a video from its YouTube site featuring the “Mocha Spin Docs,” a self-described “group…for women physicians of color who love spinning on their Peloton bikes.”

On February 16, 2021, Peloton filed a Petition to Cancel at the United States Patent and Trademark Office (USPTO) against Mad Dogg’s registration for the term “spin.” In their Petition to Cancel Registration, Peloton is arguing that the terms “spin” and “spinning” are generic terms in the fitness industry for cycling activities and that “Mad Dogg should be barred from continuing to abusively enforce its improper trademark rights across the spinning industry.”

The petition cites that numerous cease and desist letters were sent not only to businesses in the industry, but to bloggers and journalists as examples of Mad Dogg’s abusive enforcement as well.

In their petition, Peloton gives general descriptions of typical indoor spin bikes, spin classes, and Peloton’s in-home offerings. Peloton goes on to state that “Mad Dogg made the unfortunate choice to select the generic terms ‘SPIN’ and ‘SPINNING’ as the ‘brand’ name of its bikes…even though these are the exact terms for this category of exercise bike,” and that “Mad Dogg doubled down on its poor choice of names by expending significant time and money securing trademark registrations for the generic SPIN and SPINNING terms.”

Peloton further argued that “Mad Dogg should no longer be able to intimidate the world into avoiding these commonplace generic terms to accurately describe their bikes and classes.”

As evidence of genericity, Peloton cites the use of the terms “spin” and “spinning” on Google searches, Wikipedia, and Urban Dictionary. Peloton also cites articles, memes, and media uses of the terms as a “small sampling of the vast library of generic uses” of “spin” and “spinning.” Peloton argues that the general public, including reporters and bloggers, understand the terms to primarily refer to stationary exercise bikes and fitness instruction, and that the terms were generic before they were adopted by Mad Dogg.

The Future of Mad Dog’s Trademark

Peloton also states that its brand is being damaged and will continue to be damaged if Mad Dogg is permitted to continue its registration.

Mad Dogg, Inc. issued a statement in response on Feb. 23. The statement contested Peloton’s depiction of the legitimacy of the trademark, claiming that, regarding the portrayal of Mad Dog as “trying to assert rights that are not well established or grounded in trademark law,” “the opposite is true.”

As far as the future of the registration, the USPTO has jurisdiction to decide if the trademark’s legitimacy will be upheld or if Mad Dogg, Inc. is officially spinning out of control.