Were the famous brothers patent trolls? Or just entrepreneurs trying to be compensated for their hard work and ingenuity? 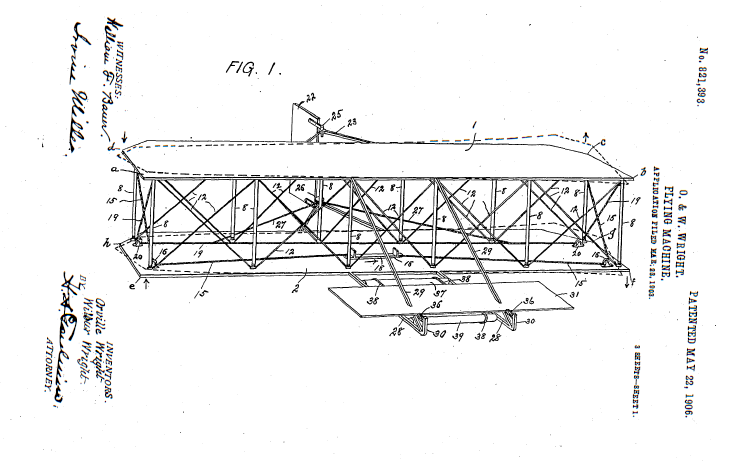 The 115th Anniversary of the Wright Brothers’ first issued patent, U.S. 821,393 entitled “Flying Machine” is upon us. Orville and Wilbur Wright, bicycle shop owners, solved the problem of lateral roll control on May 22, 1906. According to their patent:

“The objects of our invention are to provide means for maintaining or restoring the equilibrium or lateral balance of the apparatus, to provide means for guiding the machine both vertically and horizontally, and to provide a structure combining lightness, strength, convenience of construction, and certain other advantages which will hereinafter appear.”

The Wright Brothers were naturally proud of their work, so much so that Wilbur Wright stated in a January 29, 1910 letter to noted French-American civil engineer and aviation pioneer Octave Chanute that:

“…I do not find in any of them any mention whatever of controlling lateral balance by adjustments of wings to respectively different angles of incidence on the right and left sides. Have you ever found such mention? It is not disputed that every person who is using this system today owes it to us and to us alone. The French aviators freely admit it. No legal disclosure of the system prior to us has yet been produced.”

While most of the general public lauds the Wright Brothers as inventors and heroes, industry players and competitors of the time accused them of stifling aviation innovation because by choosing to enforce their patent rights. Even some modern-day commentators have referred to the Wright Brothers as “patent trolls”: a pejorative term applied to a person or a company attempting to enforce patent rights against accused infringers for technology perceived to be far beyond what the patent claims are construed to cover.

The Wright Brothers’ enforcement efforts against Glenn Curtiss and others have been referred to as a patent war, which included 12 major lawsuits. In 1908, the Wright Brothers warned Curtiss not to infringe their U.S. patent no. 821,393 by profiting from flying or selling aircraft that used ailerons (a hinged surface in the trailing edge of an airplane wing that is used to control lateral balance).

Some believe that the Wright Brothers’ enforcement of their patent rights was too aggressive and hindered the aviation industry in the US, such that the US was forced to use French airplanes during World War I. Some scholars, however, dispute the idea that the patent battles waged by the Wright Brothers stifled innovation in the overall aviation market. In their 2015 paper, scholars Ron D. Katznelson and John Howells found that “despite the existence of basic aircraft patents, aircraft manufacturers faced no patent barriers in the market.”

In 1917, because some believed that the two major patent holders, the Wright Company and the Curtiss Company, had effectively blocked the building of airplanes needed during the war, the newly established National Advisory Committee for Aeronautics pressured the industry to form a cross-licensing organization. This organization, called the Manufacturer’s Aircraft Association, effectively created a patent pool. All aircraft manufacturers were required to join this association, and each member was required to pay a comparatively small royalty for each airplane manufactured covered by aviation patents; most of the fees went to the Wright and Curtiss companies, until their respective patents expired.

This arrangement was designed to last only for the duration of the war, but in 1918, the Wright Brothers’ patent war came to an end. By this time, Wilbur had died (May 1912) and Orville had sold his interest in the Wright Company to a group of New York financiers (October 1915) and retired from the business. Of note, despite their patent battles, the Curtiss and Wright companies merged in 1929 to form the Curtiss-Wright Corporation, which exists to this day.

Many dislike the concept of patents, feeling as though they are simply government monopolies, or that “bad” patents are asserted by entities to make a quick buck. The issue, however, isn’t black and white. It is true that patents are granted by world governments, and patents give inventors a negative right: the right to exclude others from practicing the invention covered in their patent.

It is also true that patent trolls exist, operating in order to make a quick buck. But truth is that patent protection is the only way for businesses to protect their investment (monetary and sweat equity) which goes into every product they develop. In the truest sense, patents encourage genuine innovators to find ways to solve a problem (i.e. invent something) without infringing on another’s patent. Investors demand patents to cover inventions, as it makes little sense to invest in technology without owning the rights. It takes a significant amount of time and money to commercialize a product, and if a free rider can come in, copy, and commercialize the product at lower cost without any threat of repercussion, an investor will never recoup their money.

Should small businesses invest in patent protection? Yes. Otherwise, if you have a desirable and successful invention, competitors will likely copy your product due to lack of recourse to stop them. Even with patents, the Wright Brothers were caught in a lengthy legal battle over the issue. However, without patents, the Wright Brothers would have had no leverage to license their innovations or to win a verdict against Curtiss.

Without a patent protecting your innovation, you are in a fragile position, and your opportunity for business growth may be stunted. If you are developing new products, obtaining patents should be part of your overall business strategy. Trust me, I’m Wright.

For more information on obtaining patents, contact Intellectual Property attorney Kathleen Kuznicki at kkuznicki@lynchlaw-group.com or by phone at (724) 776-8000.