Health of A State: Police Power and the Stay-at-Home Order

Home » News » Health of A State: Police Power and the Stay-at-Home Order 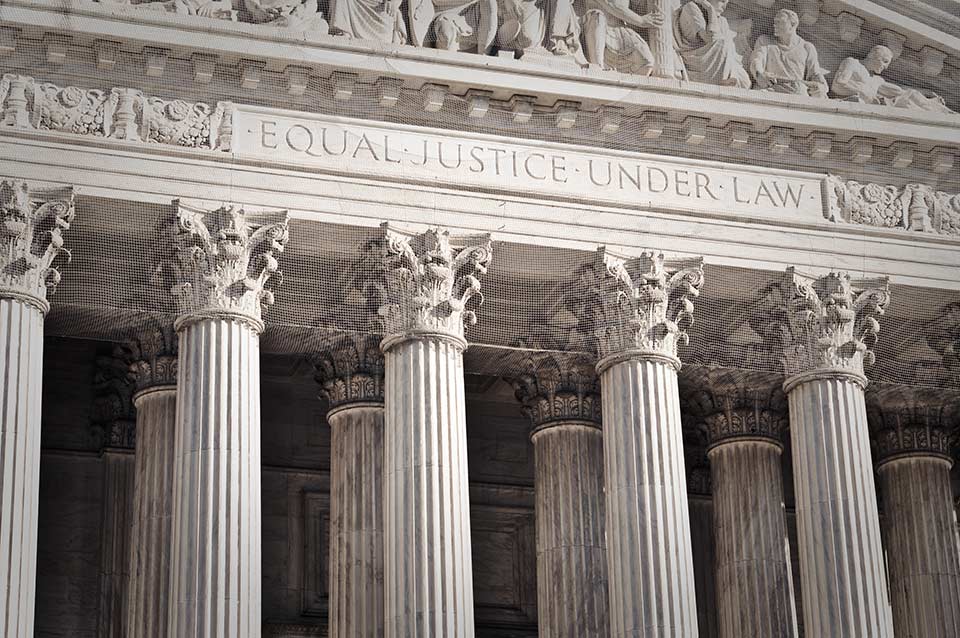 COVID-19 has affected so many lives that the American people do not know whom to look to for assurances. Every day there are updates from the President of the United States, as well as updates from various governors across fifty states in North America. People have been arguing over the actions implemented by many state governors, and whether those actions are an encroachment on people’s liberties, or if additional actions are warranted. The answer to both questions lies in the core documents of our country and state. The Constitution of the United States of America (the “Constitution”) remains adherent to the principles and liberties the forefathers drafted while attempting to transition and guide the American people regardless of the time. When assessing the actions enacted by state governors, the Constitution must be interwoven with the states’ constitutions to maintain rights and laws as society grows and America changes.

Since COVID-19 struck the United States with force, American people questioned how it would affect them and their lives. In an unprecedented situation, where the federal government delayed action, state governors embarked on protecting the health and safety of their citizens through their state’s police powers. However, as weeks continue to go by, tempers flare as unemployment skyrockets, and smaller businesses struggle to find a way to remain, citizens from all walks of life argue that the governors do not have the right to regulate their lives through police power.  The debate has caused many people, across all 50 states, to protest the “Stay-at-Home” orders and the elective shutdown of various businesses causing many to be unemployed. In Pennsylvania, many argue that Governor Wolf has overstepped his power as he continues to battle COVID-19 through his declarations.  However, the governor’s ability to regulate the state’s police power is set forth under 35 Pa.C.S. §§ 7102 and 7301, et seq., which defines the governor’s authority and responsibility during a disaster emergency declaration.

35 Pa.C.S. § 7301, permits the governor to issue, amend, and rescind executive orders, proclamations, and regulations which shall have the force and effect of law. See 35 Pa.C.S. § 7301(b). Further, the governor has the power to proclaim a disaster emergency, upon finding that a disaster has occurred or is imminent.  See 35 Pa.C.S. § 7301(c). With the CDC warning that COVID-19 cases would only increase at an unknown speed, Governor Wolf declared an emergency. He executed a disaster emergency declaration to provide Pennsylvania, and its citizens increased support to respond to the virus.  See 35 Pa.C.S § 7301(c); see also Order of the Governor, governor.pa.gov (Archives, March 6, 2020).

Today is April 22, 2020, and this past week has included various protests and signs indicating “my body, my choice.”  Pennsylvanian’s held a protest on April 20, 2020, voicing their want to return to work, but many used the protest to condemn Governor Wolf and his “dictator” ways. Regardless of political association, Governor Wolf has the authority to respond to COVID-19 in the exact manner he is through his office and oath to promote the laws and uphold the Constitution of Pennsylvania.

When the federal government failed to implement immediate measures in response to the increasing threat of COVID-19, state governors, including Pennsylvania, declared state emergencies to protect their citizens.  The Constitution of Pennsylvania provides that “[t]he supreme executive power shall be vested in the governor, who shall take care that the laws be faithfully executed.”  See Article IV § 2 of the Constitution of Pennsylvania.  As such, Governor Wolf’s declaration and subsequent measures, can be viewed as a direct application of a state exercising its police powers to establish the means by which the community may enforce civil self-protection rules. Galva JE, Atchinson C, Levey S. Public Health Strategy and the Police Powers of the State.  120 Public Health Reports, Suppl 1, 20-27 (2005).

The limitations Governor Wolf has placed on Pennsylvanians have not restricted our liberties, and any liberties that are currently restricted are time-sensitive. During the Warren Court period, state police power was reviewed with a strict scrutiny standard to determine if a state’s police power limited its citizens’ liberties during a health crisis; however, the better test would be to examine whether the state’s action to protect the public health outweigh the individual liberties allegedly infringed.  To those who question whether Governor Wolf has the authority to enact and proclaim all orders that he has signed since March 6, 2020 – the answer is yes.  Governor Wolf has not absconded with our rights; he has not declared complete and total power over the state or its citizens, nor has he maintained a disaster emergency where one does not exist.  The Governor is well within the powers vested to him not only by the Tenth Amendment but also by the Constitution of Pennsylvania.

The Pennsylvania Supreme Court has already ruled on Governor Wolf’s executed orders in response to COVID-19 and his authority to enact such orders in Friends of Devito v. Wolf, 2020 Pa. LEXIS 1987 *27 (April 13, 2020). In Devito, the petitioners challenged the applicability of [Governor Wolf’s] powers in response to a viral illness like COVID-19, and contended that even if there was any applicability, no power had been conferred that would permit [Governor Wolf or Dr. Rachel Levine] to close their businesses. 2020 Pa. LEXIS 1987 *27 (April 13, 2020).

The Pennsylvania Supreme Court previously defined the Commonwealth’s police power “as the power ‘to promote the public health, morals or safety and the general well-being of the community.’”  Pa. Restaurant & Lodging Ass’n v. City of Pittsburgh, 211 A.3d 810, 817 (Pa. 2019).  The police power is the state’s ‘inherent power of a body politic to enact and enforce law for the protection of the general welfare.’ Nat’l Wood Preservers, Inc. v. Dep’t of Envt’l Protection, 414 A.2d 37, 42 (Pa. 1980).

The Court held that the police power is fundamental because it enables ‘civil society’ to respond in an appropriate and effective fashion to changing political, economic, and social circumstances, and maintain its vitality and order.  Friends of Devito v. Wolf, 2020 Pa. LEXIS 1987 *27 (April 13, 2020).  The Court held that the police power [must be] … as comprehensive as the demands of society require under the circumstance. Id. (quoting Comm. v. Barnes & Tucker II, 371 A.2d 461, 467 (Pa. 1977). The Court provided that the state’s police power is a broad and flexible power that can regulate business operations because of their relation to health. Devito, supra, at *27 (citing Grime v. Dep’t of Instruction, 188 A. 337, 341 (Pa. 1936).

In reviewing the grant of police power to the governor, the Court engaged in a statutory interpretation of 35 Pa.C.S. § 7102 and its use of the word ‘disaster.’ See 35 Pa.C.S. § 7102. In plain language, disaster was defined as ‘any hurricane … or other catastrophe which results in substantial damage to property, hardship, suffering or possible loss of life.’  Devito, supra, at *28; see also 35 Pa.C.S. § 7102. The Court proclaimed that the Governor Wolf found that a disaster had occurred and was required to declare a disaster emergency under 35 Pa.C.S. § 7301(c) as previously set forth.  Devito, supra, at *28. The Court, after analyzing the Governor Wolf’s vast powers granted under 35 Pa.C.S. 7301 including those additional powers conferred under § 7301(f), held that the COVID-19 pandemic triggered Governor Wolf’s authority under the Emergency Code and as a result, [he] had the authority under the same to declare the entirety of the Commonwealth a disaster area invoking the state’s police powers.  Devito, supra, at *35.

The Petitioners next argued that Governor Wolf and Dr. Levine exceeded the permissible scope of their police powers by closing all businesses deemed non-life sustaining; that shutting their businesses did not unnecessarily prevent COVID-19 from spreading; and that closing [these] businesses was unduly burdensome. Id. at *36-37. The Court rejected these arguments and declared that  Governor Wolf and Dr. Levine had a choice on how to handle mitigation of COVID-19, and “so long as the means chosen to meet the emergency are reasonably necessary for the purpose of combating the ravages of COVID-19, [that choice] is supported by the police power.” Id. at *39. The Court further set forth that [Governor Wolf and Dr. Levine] provided medical evidence that COVID-19 did not spread because it was located ‘at’ a particular location; rather, it spread via person-to-person contact and was capable of remaining on surfaces for a period of approximately four days.  Id. at *39-40.  Moreover, the Court provided that the issue was not whether the closure of their businesses was unduly burdensome, but instead, whether the closures were unduly oppressive, which would negate the use of police power. Id. at *40. With 12.8 million citizens’ lives at risk and the unknown quickness with which COVID-19 could spread, the Court found that business closures to protect Pennsylvanian’s health and lives was not unduly oppressive. Id. at *40-41.

[1] The Supreme Court first validated police powers in Smith v. Turner, 48 U.S. 283 (1849), when Philadelphia isolated itself to control the threat of yellow fever.  In Turner, the Court provided that

“[i]n giving commercial power to Congress, the states did not part with that power of self-preservation. . . [the state] may guard against the introduction of anything which may corrupt the morals, or endanger the health or lives of their citizens.  Quarantine or health laws have been passed by the states, and regulations of police for their protection and welfare.

Id. at 400.  The Supreme Court has affirmed state police power and quarantine as a well-established form of public health regulation “to provide for the health of the citizens. Gibbons v. Ogden, 22 U.S. 1 (1824).

Another case before the Supreme Court, encased that the Court did not receive challenges to other Amendments, when the challenge involved a communicable disease regulation, including quarantine.  See Jacobson v. Commonwealth of Massachusetts, 197 U.S. 11 (1905).  The standard changed under the Warren Court (1953-1969), who examined the constitutional validity of quarantine under heightened procedural protections of the Fifth and Fourteenth Amendments.  See Richards EP, Rathburn K.  The Role of the Police Power in the 21st Century. 26 J Sexually Transmitted Disease 350-7 (1999); see also Gibbons, infra.

Kate Snyder is a member of the Litigation Practice Group. She can be reached at (724) 776-8000 and ksnyder@lynchlaw-group.com.